April 2019 – Coming up with the name was something that we really struggled with, we wanted it to be something that reflected who we are and what we love but we also wanted it to connect to the place where our new venture would begin. So, after many frustrating whiteboard sessions, big pages of scribble and late night inspirations that resulted in one word text messages with a name suggestion being sent around to the family we finally settled on TreAnd.

Being from a Danish background and with a Scandi feel to our new cellar door we had always tried to get this into the name. So, to translate directly into Danish; Tre is Three and And is Duck.

The ‘Tre’ represents the 3 dams on the property as well as the 3 generations in our family who are involved, the youngest, Emilie, at age 8 is a superb painter of pruned vines and toaster of marshmallows on cooler afternoons. The rest of us, well we just do everything else 😊

‘And’ is many things but we love that most mornings when you arrive the family of ducks that live on the front dam waddle out from amongst the Cabernet and make their way across the drive in you.

So we sent this new name off to our very clever (and Danish) graphic designer, Anja Soelvhiid, who came up with logo and joined the TRE and the AND with that clever dot! 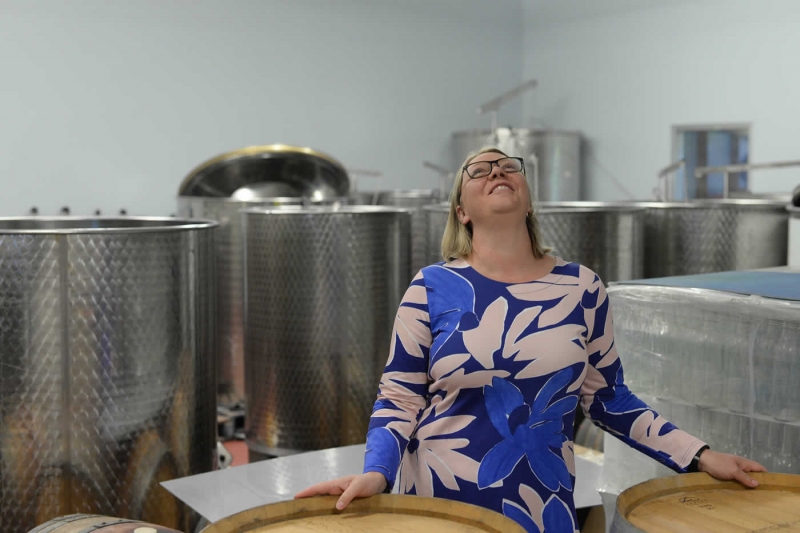 October 2018 – Having sold our restaurant, Windows on the Bay after 7 fabulous years in Mordialloc and having the project of reopening of a fabulous old hotel in the Victorian Goldfields fail to get off the ground, we felt like we really weren’t having a lot of luck finding what was the right ‘thing’ for our next challenge. Sitting at my kitchen bench one day, Dad & I were feeling a little frustrated when a random google search changed all that and we became the proud owners of the lease to a beautiful little boutique vineyard – 5 minutes from home.

Life works in funny ways but this felt right from the very first time we turned into the drive at Baxter Valley Estate, we just needed to work out the details – like learning how to make wine and manage a vineyard! But our family has never been scared of a challenge plus we are also pretty good at knowing what our limits are, so we decided that what we lacked in knowledge we would make up for in effort and get help from the very best people we could find. But yes, some days I do still have to laugh at myself because otherwise I would probably just end up crying in a corner if I didn’t.